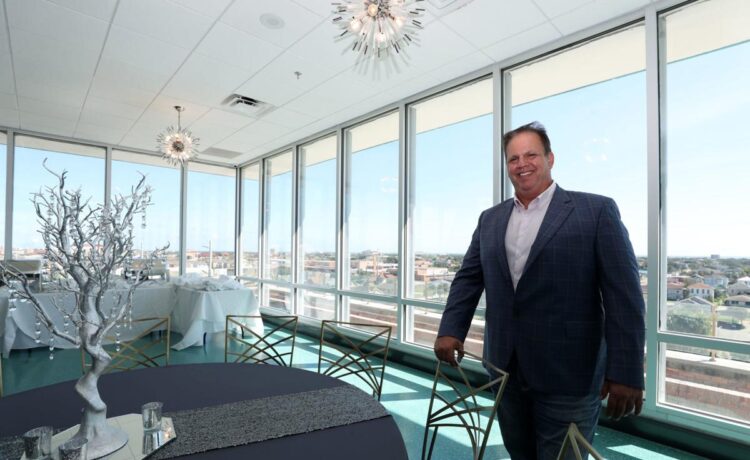 With his commitment to the redevelopment of apartment complexes Sonja and Riviera on Broadway in the Old Galveston area, attorney and developer Jerome Karam Houston is now probably the largest commercial property developer in the county. Already well-known for his high-profile development of the Falstaff Brewery, which he transformed from a knock-down into a storage center and major events space, this latest acquisition will solidify his reputation as one of the most interesting developers operating in Houston.

He bought the 1930s properties that have significant architectural features, with the aim of making significant renovations. He has said that he doesn’t plan to evict the tenants until their leases expire after which he plans to transform the properties for short-term rentals and Airbnb lets.

The properties are well suited to short-term rentals since they include parking spaces in an area in which they are at a premium. The properties are also conveniently located at the University of Texas as well as Galveston Beach, which will make them suitable for visiting parents of students. Parking shortages are one of the issues with short-term rentals in the area and the properties, with dedicated parking, will make them an attractive option for visitors.

Karam has said he has confidence in the Airbnb business model, and he plans to develop more short-term and long-term rentals in the area. In line with this, he is also seeking approval from the League City Council to build a 300 unit apartment complex at Pinnacle Park.

The purchase and planned redevelopment of the Sonja and Riviera properties demonstrates the belief that short-term rentals will be in great demand. Karam has said that the acquisition of the properties involved David Bowers (representing The House Company as the seller) and David Wallace (representing Advance Regional Agency as the buyer).

It has been announced that CityStreet Residential Partners will be involved in the League City apartment complex redevelopment. The group has a solid track record in high-profile property redevelopment and is hoped that this will address League City officials’ concerns who have denied permits for mixed-use developments in the past.

League City’s leaders are not normally in favor of multifamily developments. They tend to take the view that they generate traffic, attract crime, result in school overcrowding, and lower property values. With these complexes generating low income for the city government while requiring significant infrastructure investment, they are not seen as an overall positive.

CityStreet Residential Partners, however, does not develop properties merely to sell them on. The company seeks to attract high-quality tenants with high disposable incomes which will benefit the local community. This, they believe, would in turn help to solidify the luxury apartment rental industry for empty-nesters, well-heeled retirees, and urban millennials.

Jerome Karam Houston is well-known for his community restoration projects through his company, JMK5 Holdings. He has consistently brought a prestige factor to his development projects and his company exceeds expectations. It stimulates local economies by hiring local tradesmen and buying materials and services from the local community. The result is that new life is given to older buildings that once seemed beyond repair and, in the process, developing new communities that revitalize otherwise stagnant areas.

Some of the company’s current projects, in addition to the above, are Bayou Bend Estates, a 47-unit waterfront property, as well as the Galveston Bay Club. The company also has 40 lots of waterfront properties at Hideaway Estates; these offer spectacular views over land that is rich in coastal wildlife. In addition, Karam plans to accept tenants at his Magnolia Bend Manor starting in 2021 making this a busy year for the developer.

Domain Names: What They Are and How to Buy Them

How Recruitment Agencies Help You Find The Right Job?

Smart and Perfect CRM Systems As per Requirement

What to Look for in Compliance Training Courses

The Expenses to Think About in the Laundry Business

Exposing The Eco-Friendly Ways Of Dust Suppression On Demolition Sites